A few weeks ago, I introduced the Thriving Franchise Model.

This model has three pillars:  Commitment to Innovation. Effective Execution and Prime Leadership. 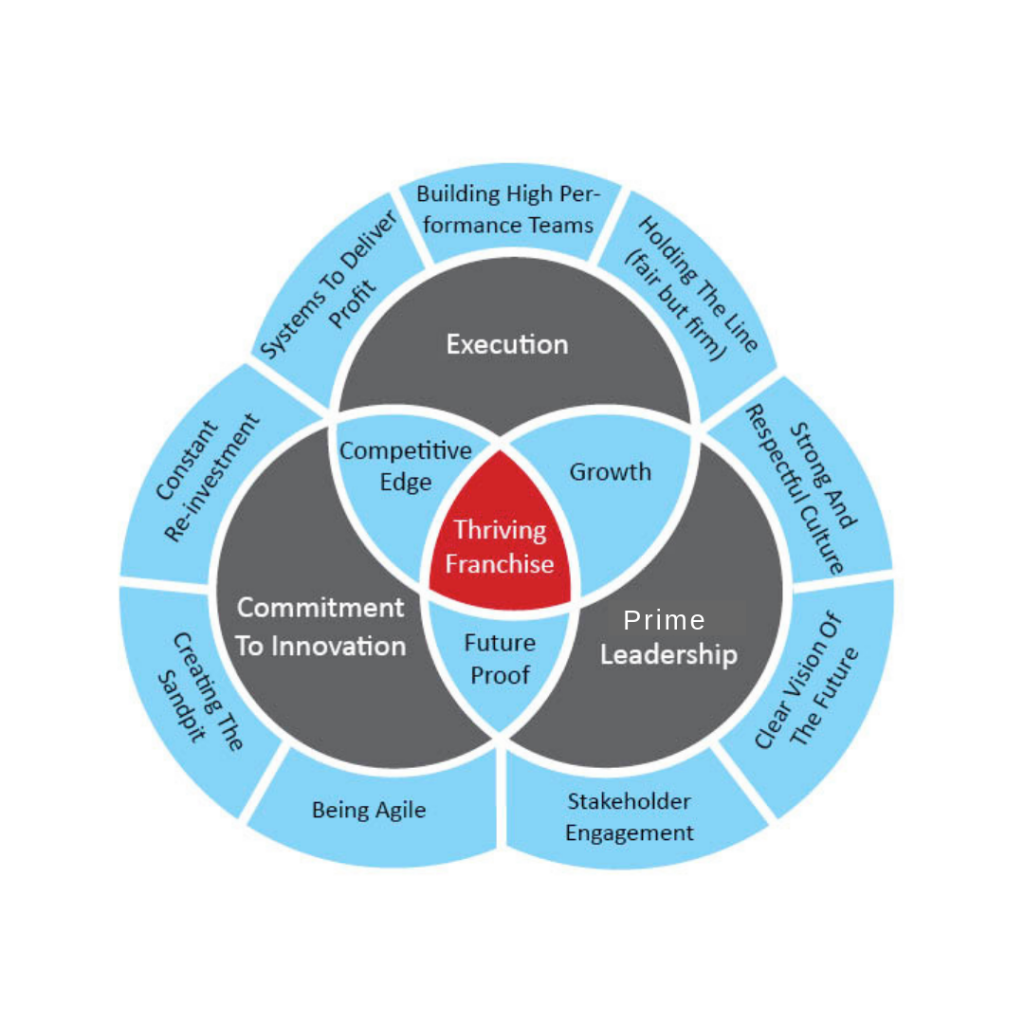 You can read the introduction to the model here.

Today I’m going to delve a bit deeper into Commitment to Innovation.  This is one of the pillars that is not talked about that much in franchising circles.  It seems that we are so caught up in trying to deliver the system to franchisees, put out fires and keep our head above water, that looking to the future and what’s on the horizon is often just too difficult.

When you look at national and international franchising conferences, the content is all tactical: how to improve franchise recruitment, relationships, social media, marketing, etc.  Nowhere are questions raised about changing and adapting to future trends and about making sure your franchise system stays relevant. There is almost an underlying assumption; ‘’you are a franchise and therefore you are relevant’’.  This underlying assumption is wrong.

I’ve counted well over 20 franchisor collapses in Australia; major failures in the past decade.

This is where Commitment to Innovation comes in.  Although this sounds fluffy, when you break it down into its three subparts, creating the sandpit, constant reinvestment, and being agile, the ideas start to take shape.

In Beth Comstock’s brilliant book ‘’Imagine it Forward’’, she says:

‘’optimise today and build tomorrow.  Companies have to learn how to do both if they expect to be around for future generations.  Good leaders know it is their job to manage the tensions from this hard balancing act’’

It’s the balancing act that the Thriving Franchise Model illustrates and elaborates upon.

Now more about Commitment to Innovation…

The research highlighted three elements to innovation; constant reinvestment, creating the sandpit and being agile.  Although this came up in the research as an important topic, this area of a healthy/thriving franchise was not given as much emphasis as the other Pillars: Leadership and Execution.  Nevertheless, it is an important part of future-proofing any franchise system.

Innovation is about finding new ways to satisfy customers or even connecting to customers in a way that is profitable to franchise partners and to the franchisor. 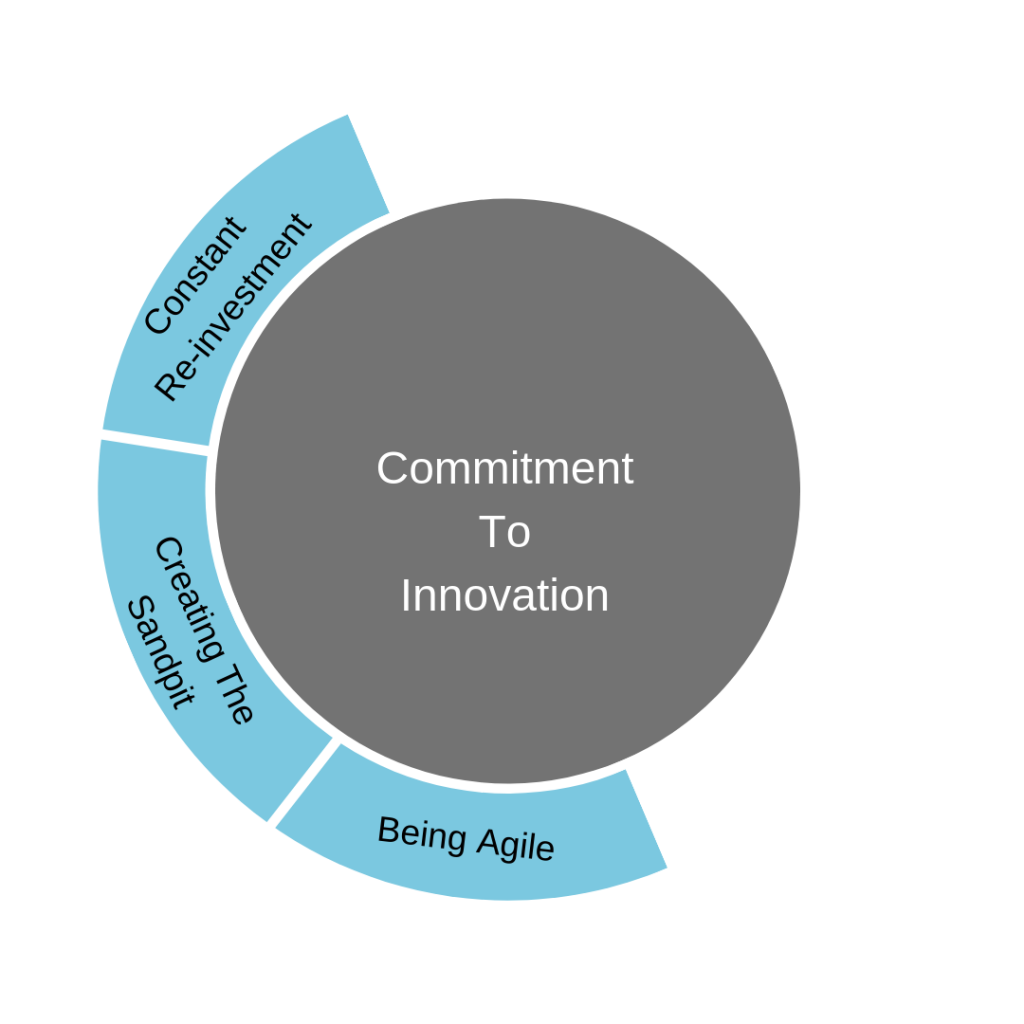 The research highlighted the need to constantly invest and improve on products, systems, and services within a franchise network. In the words of one mature franchisor:

Finding the resources to invest in new products and opportunities is not always easy, particularly for those emerging franchisors with stretched cash flow due to rapid growth and those in the retail sector experienced declining customer numbers and revenues.  However, it is something that should be a major part of a strategy, even in times of downturn.

One franchisor I spoke to has diverted income from rebates from putting into annual conferences to investing in new products as an example of prioritising innovation.

The sandpit refers to a space to trial new products and potentially new ways of doing business.  It can be a place to experiment totally outside of the normal operational systems or it can be a mini-lab within existing spaces.

McDonalds’s Australia is a case in point in terms of using a live testing lab to experiment with new concepts, products and services It has a non-branded cafe in Sydney called The Corner, which was the testing ground for many of the innovations we now see such as Create Your Tastes menus.

Many franchise systems use their Franchise Advisory Council as well as corporate stores to test out new product ranges. One franchisor said:

I’ll ask franchisees to do 10 trials. If there’s any risk or loss, we obviously pay for that. So we still get 10 percent of our businesses trialling stuff, it’s just not all within our own stores. You get advocates of franchisees going; The trial worked really well, or it didn’t.

The ability to be agile is a crucial element in being a healthy and thriving franchise system.

The ability and willingness for franchise companies to change quickly and adapt to rapidly changing markets is something highlighted by a small number of research respondents.  However, from a long-term observer’s perspective, many franchise systems that have been unwilling or unable to adapt to market conditions have inevitably exited or declined significantly.

Change is difficult and even more so when there are hundreds of franchisees that need to be engaged in the change process and come in behind and support it.  How can franchisors be agile and still manage the day-to-day operations of the business, keeping franchisees happy and engaged?

McKinsey and Co have developed a model of a new type of organisation emerging that enables a type of agility, whilst retaining the important elements of stability so important in a franchise system.  The model makes the organisation more of an ‘’organism’’ rather than a ‘’machine’’.

What this model means is that operation units are less in silos and that operational teams are mobilised and disbanded as needed. More can be found about this here.

What do you think? What is your opinion of Commitment to Innovation? What in your opinion, makes an innovative franchise system? Do you know where this is being done really well?